But you can also create an ‘app’ that can be granted permission by other Twitter accounts to access their information and even tweet on their behalf.

If you have ever granted this permission you will see the app in your Twitter account’s Settings, Apps options where you can see what apps have been granted permissions as well as revoke permissions.

Step 1. Make sure your ‘dev’ account has a mobile phone on the account otherwise you cannot proceed.

Step 3. If you haven’t already set up an API app there will be nothing to manage and it will simply show you a ‘create an app’ button. Click that button and follow instructions to setup the API app.

Step 4. Save your new API app’s consumer_key, consumer_secret, access_token, access_token_secret credentials for use in following steps.

Step 5. Log out of your dev account once the dev API app is setup and running properly.

Step 7. Go get this code which is what will do some magic to grant permission for your new Twitter API app to tweet on behalf of your other Twitter accounts. Save this code on your computer and keep it open in your code/text editor so you can make some changes.

Step 8. Get your app’s consumer_key, consumer_secret, access_token, access_token_secret credentials that you got from Twitter API management and paste them into the appropriate place in code you just downloaded and saved.

Step 9. Now run the code using command line interface and it will generate a URL in the command line window and show a URL that contains tokens that were generated specifically for your app and the other Twitter account. You just have to copy and paste the url into a web browser. Copy the url from command line window. 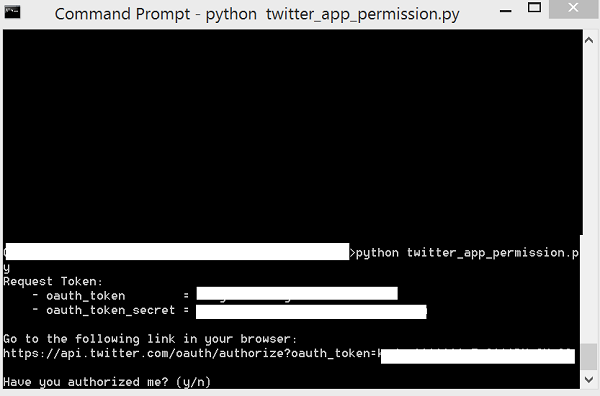 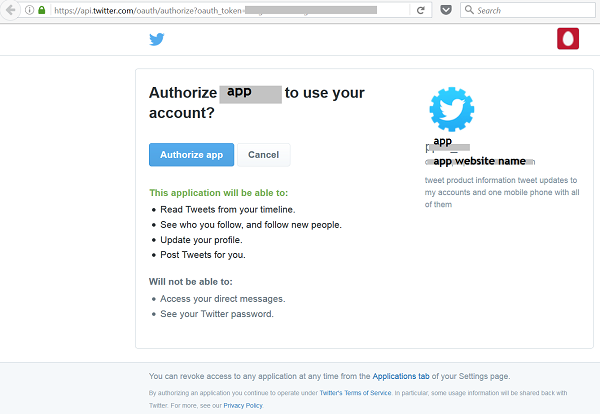 Step 11.  After clicking Authorize App button you will see a web page that shows a special PIN code generated just for this one time use. I have hidden the PIN in screenshot but you will have a number where it says “PIN number is here”. Copy this PIN. 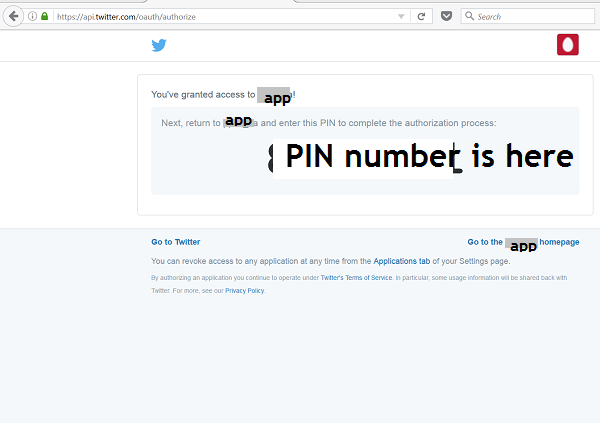 Entering PIN code automatically registers/adds your dev API app as a 3rd party app in the Twitter account you are currently logged into and generates two strings of characters in the command line window. These are tokens you need to copy and save so you can use them later. You will need to enter them as credentials for the dev API app to read and write Tweets for the currently logged in Twitter account. 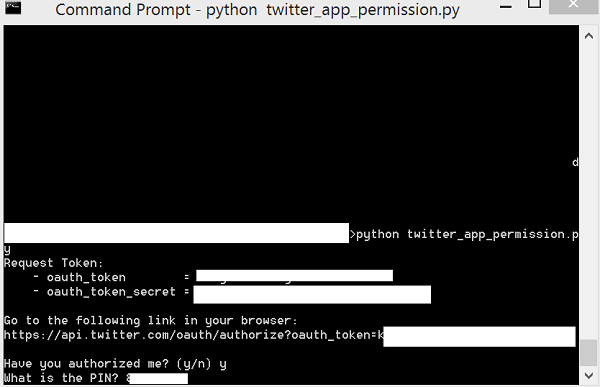 If you go to your Twitter account and select Settings – Apps you will see that your dev App is now registered as an authorized app that can Tweet and read Tweets on behalf of your Twittter account.

Now its up to you to create Twitter API code to use these new authorizations. Try using Tweepy or any of the other many Twitter Python modules that are available. Happy Tweeting.

You will end up with a bunch of tokens that you can use to read and tweet for all of your Twitter accounts.

So just to summarize what you have done is authorized one of your Twitter accounts, which has a verified mobile phone number, to read and write Tweets for any number of other Twitter accounts you have, using the Twitter API.

For more information on Twitter API check out their developer site at https://dev.twitter.com/