This Sankey chart represents human arterial blood flow from the heart down into the smallest named arteries.

A Sankey chart visualizes directional connections between nodes. In this case the nodes are artery names and the connections are flow of blood through the arteries.

The full sized chart is huge, so first take a look at the small size view below to get oriented.

The data used to create the visualization can also be viewed in tabular format here.

Two screenshots below, from the visualization’s top level branches, highlight where blood flows from heart to body and lungs. The grey connections represent blood flow. The colored ‘nodes’ represent the arteries.

You are able to click on the nodes which will highlight the connections and blood flow. This is a great way to see how blood flows from artery to artery. 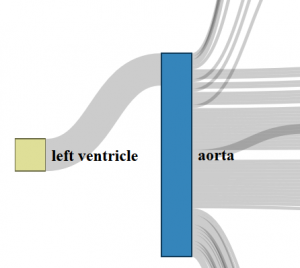 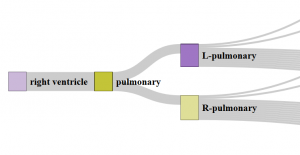 The data was sourced from this UAMS web page
http://anatomy.uams.edu/anatomyhtml/arteries_alpha.html.

Quite a bit of cleaning was required to get the data ready to be used by D3 to create the Sankey charts. Some of the data transformations required are described below:

Some interesting observations about the artery data used to create chart and possibilities to extend the data and chart:

This arterial Sankey chart includes some additional D3 JavaScript that modified the chart formatting and includes feature to highlight node links and to allow node drag and drop re-positioning. You can view the JavaScript for my Sankey chart simply by viewing the Sankey chart’s page source.

The code used to create this is available in this Github repository.