Comparison of my old Palm vs my new Pocket PC

I thought I would write this to share some of my experiences making the transition from the Palm platform to Windows CE/Pocket PC, as well as some of the things I did to my Pocket PC 2003/Dell Axim X30 to make it function better for me. At the end I get into a more polemic editorial on the looming Microsoft hegemony on the PDA OS world – a good thing, and a bad thing.

What did I use my Palm VIIx for?

Side by Side Views 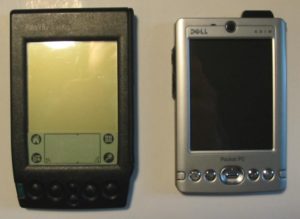 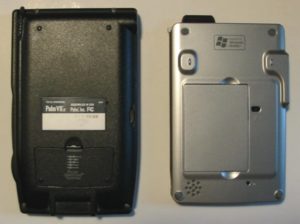 I never used the “Wireless” capability of my Palm VIIx. I actually became annoyed by the antennae popping up and down (it was so loose that it always moved) and activating the modem software, so I Crazy Glued it to the Palm.

But in any event, look at the size of that antennae!

Ok let’s get into the details

There are some very fundamentally important things that I really like about my Palm compared to my new Axim. Maybe I am used to the Palm but it got what I wanted done quickly and efficiently. I hoped that my Dell Axim would far surpass that. It hasn’t .. yet! I am continuing my search for applications, tricks, and new ways to do old things!

Anyways, after many years, I was very happy with what I was getting from using Palm. Even though the Palm VIIx is relatively stone-age in terms of hardware, size, etc, I found it and a Palm 100 I had a few years before, to be incredibly useful. While the PPC is the more flexible platform, the Palm does things in a much more efficient, and often more powerful way. I could treat my Palms like the brick of plastic they were. The VIIx screen crapped out on me once, so I opened it up, took it apart cleaned connections, reseated cables, and voila it worked again. I read ton’s of ebooks on it. I also used it on a daily basis for Appointments, Expenses, Tasks, Notes, Excel and Word document editing.

That said, I am overwhelmed by the advances that have been made in less than four years between when the Palm VII (it came out 2001) came out to the current slate of PPC’s.

Dammit, with my Axim X30 312 mhz, I can be listening to MP3’s (the sound on my Axim MP3 really rocks-equalizer, extra bass), while reading Bill Clinton’s, My Life on Mobibook! I can play games like Quake, which was a real struggle on my old 486 50 Mhz Pentium but is smooth as butter on my new Dell Axim X30. Truly amazing.

This brings to mind the exponentially increasing exponential increase in processing power ratio ala Ray Kurzweil .. but dammit again, this just reinforces my consternation about why I am feeling a shortcoming about I can/cannot do with my new PPC vs the Palm given the enormous boost in hardware capabilities! Maybe its not the hardware .. then again, why I am complaining when it is a bit slow? My Palm couldn’t even mult-task, let alone exhibit such brute strength. Clearly, I am conflicted. Clearly, something is conflicte. Anyways, I got my Pocket PC a couple of weeks ago. The amazing price of the Dell Axim, built-in WiFi & Bluetooth made it an easy choice.

After shopping around for Pocket PC PDAs and lots of reading, the only contender was the Ipaq 4150, but even with its greater supposed “form factor”, and longevity of service, etc it was almost $300 (Hello US citizens, this is Canadian Dollars) more expensive. Also, the Dell 312 Mhz cpu rates as fast, or faster in many categories than the Ipaq’s 400 Mhz. So, I fired off my money order (not only do I believe in reducing my ecological footprint, I believe in reducing my electronic footprint) by overnight courier to Dell here in Toronto.

I initially had four orders placed with Dell because the Canadian website was confusing, so I kept going back to make sure I was ordering what I wanted. A little aside here, I know a high level technology manager at Dell Canada who says the guy in charge of the Dell website is a doofus. The US site was great. Anyways, a few strategic phone calls to iron this out probably didn’t hurt in elevating my profile. Then I put “RUSH, per Customer Rep” accentuated with highlighter on the order printout attached to my money order. I was trying to push some buttons in the machine to make sure my order wouldn’t get lost in the in-basket. I think it worked. Lots of people seem to be waiting a long time for their Axims. Four days later my Axim was in a truck on its way to me. It arrived 2 days after that. Not too shabby eh?

Before getting my Dell Axim, I didn’t really know much about what to expect from the Pocket PC or Windows Mobile CE OS. I assumed that the much more powerful hardware in my new Axim/Pocket PC would make everything “snappier”. However, I have discovered a confounding paradox. The Palm PDAs I had let me find and open things faster, but the Axim/Pocket PC is obviously the more powerful system when it comes down processing stuff.

For example, even though the steps are the same, opening MS Excel spreadsheets on the Palm VIIx is much faster. But calculation of formulas and the like in the Palm VIIx takes so long, I can literally tap-a-tap-tap my fingers in idleness. In the Axim/Pocket PC, it seems as fast as my desktop computer. Blink, its done.

Lets move on to another thing, the 3rd party application factor. Those Palm programmers are everywhere. There are guys in Amsterdam, Thailand, Borneo, Chicoutimi churning out tons of Palm applications for free. The PPC world is populated by programmers with $ signs in their eyes. Nothing wrong with making money but what is happening, from my perspective, is that because M$ has bankrolled PPC development, most of the players involved are bigger and better funded, and expecting a better ROI, by targeting the enterprise market and the high end consumer market.

This leaves the plain vanilla user like me with dimished opportunities. I think it would be interesting to do a comparison of the demo trial length (in days) for applications developed for Palm versus PPC. I bet it would be much shorter for PPC. There would be no contest in terms of freeware or pay-as-you-like-ware. Palm would win hands down.

Now this brings my consternation about what I can actually DO with my PPC versus my Palm to the fore. Because the benchmark for ROI in the PPC application world is higher than in the Palm world, the level of application sophistication is higher. Essentially, developers want to give more, to justify higher software cost and thus the competitive spiral elevates. Its only human nature, well almost always, because often people just don’t have what it takes, and they fake it, or they stuff it up, or bloat the ware just to add more “functionality”.

There is nothing wrong with this. Everybody should try to give the user the best experience. But from my perspective, as a user, I am more likely to get the application that meets my needs when 100 so-so developers make my expense program, instead of 3 super high-end developers making my program. Take note, we are talking about variety, about competition!

No doubt about it, M$ knows what it does. Bill Gates is not the richest man in the world for nothing. The company manages every fundamental aspect of its business from making sure that product reaches the loading dock so that revenue is accrued smoothly, to making sure that its platforms, such as Windows CE, are $ attractors. What does this mean?

This is a recurring theme with Win CE. I have downloaded the eMbedded Visual C++ 4.0eVC4.exe, Microsoft Pocket PC 2003 SDK.msi, and TodayScreenSampleSetup.exe from Microsoft. It is clear from their application development documentation that their 80/20 rule is strategically focused on maintaining the vortex. Microsoft will develop the nexus around which dissatisfaction will bring in 3rd party developers, but only the $ seekers. The best survive, M$ consumes them, and they become part of the Hive Mind.

There is absolutely no doubt that Bill Gates primary “directive” to Microsoft product managers is to ensure that their products leave strategic “gaps”, but limited so that can bring in only the high end 3rd party developers. But the directive will be explicit. LEAVE GAPS.

Brght, talented, motivated they may be, but Microsoft developers are corporate booger-heads (Scott are you reading this : )) and ultimately, they CANNOT create. They can only expand on existing corporate paradigms. 3rd parties are the only ones who can do this. This has been the strength of Mac and Palm. But alas, Mac has required propping up, by M$, as will Palm in the near future, to ensure that M$ gets the competitive motivating force it needs. Gates knows monopolies are death. It is a fine balance for Microsoft as all the anti-competition action against them in North America and in Europe can attest to.

For now, can I just ask: Where are the Linux developers for PPC hardware! Or perhaps, Palm developers of the world, learn the CE platform! You could certainly bring some sanity to the irrelevant-ware out thar.