Back in the days when I was working in environmental science, the consulting firm I was working for was doing storm water drainage planning in Surrey, BC, Canada.

The City of Surrey was planning for a new sub-division. The new sub-division would have lots of new hardened surfaces eg roads, roofs, and lawns instead of natural scrub and tree cover, which would require more frequent and higher volume water drainage to be channeled somewhere.

Our company proposed diverting this new water flow under a road and into a city right of way. The right of way was a huge section of land that was covered in natural grassland, dense shrubs, trees and a marshy area. The proposed new watercourse would flow about 1000 metres through the property and drain into the Serpentine River. Normally stormwater drainage engineers would simply channel drainage into ditches and/or covered storm water drainage that would eventually reaching the Serpentine River anyways.

The new channel was designed to mimic a natural watercourse that may have been created naturally in this field given the field’s topography, soil type and a water flow rate and volume that our engineers estimated from new sub-division.

Creating a new watercourse is a mix of science, art, physics and engineering. Water has a predictable pattern of flowing over a surface given the surface topography, soil type and  water flow rate and volume. Try putting some drops of water on one end of cookie baking sheet and then slowly lift that side up. The water drops will flow down the cookie sheet and form an s-shaped path. The higher you lift it the more straight the pattern. The same thing happens in nature.

There are other features of natural watercourses that need to be considered. The watercourse will have specific curve measurements in its s-shape. The size of curve, the depth of the outside bank, the gradient of the stream bed from the inside bank to the outside bank varies with flow.

One of the goals for this new watercourse was to provide natural habitat for fish and wildlife. So we wanted to include features that would mimic what could happen naturally such as providing stream cover in form of undercut banks, overhanging trees, grass, shrubs.

Also because we didn’t want nature to dramatically alter the stream’s course which is a natural occurrence we wanted to ensure that that shape would resist erosion. We provided bank protection in form of large tree root wads and other placements of bank hardening.

Our company had a specialist who had created scores of similar water courses. The advice I got was to use a large engineering plan drawing of the field and start sketching out the water course.

So I literally took pencil to drawings and started drawing what I thought the stream would look like. Then we worked backwards, accounting for soil type, expected water flow, curve of bend, depth of flow.

I left the company before the stream was constructed but the eventual shape was pretty close to what we had drawn. As construction progressed modifications were required to accommodate soil composition variances and some of the bank hardening was not used due to concerns about its long term integrity.

However within 2 years there was fish and wildlife habitat where there was none before. That is pretty cool!

Here is Google Maps aerial photo of the new stream. Below is a screenshot with dotted line showing where stream is located. 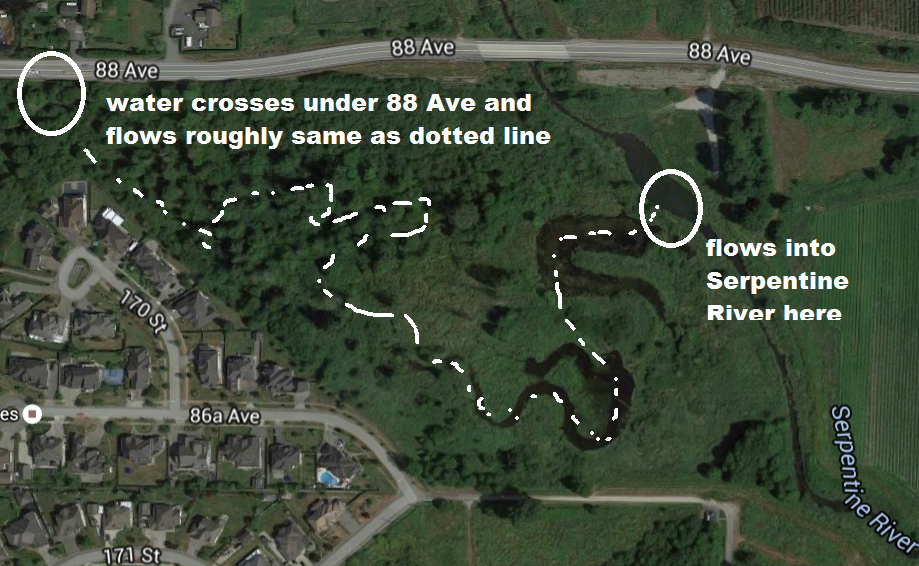