Happened to see Cuba Gooding Jr’s first tweet about 30 minutes or so after he created it.

Update: @cubagoodingjr is no longer active so not getting tweets from it any longer

At the time his profile said he had 559 followers. A few minutes later I refreshed his profile and saw the follower count had increased to 590 and every few minutes it kept increasing. By the end of the day he had about 4,000 followers.

For the technically inclined, I setup an automatic retrieval of Cuba’s Tweets using Twitter’s API and the Tweepy Python module scheduled to run daily using a cron job.

The follower counts get put into a database. I created a PHP web page application to retrieve the data from the database, and create a web page that includes the Google Charts API to create a simple line chart to show Cuba’s regularly updated follower count by day.

You can get the cron job and PHP web page code from my  Github repository.

If you want to run this code yourself you will need a Twitter developer account and an OAuth file.

Wirebase was a concept created in 2001 before broadbrand, wired or wireless was widely available.

The concept was shopped around to a bunch of Vancouver area VC’s and potential investors ultimately got lost in the dot.com bubble crash.

The idea was to create ‘wirebases’ that were a modular component integrated into an automated banking machine or deployed as a stand-alone unit in a public area.

The Wirebase set-up is illustrated in diagram below. 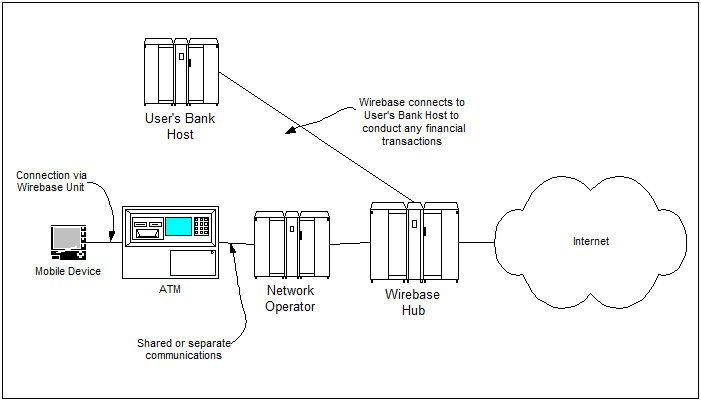 The Wirebase module is connected to the internet via a proprietary network solution that is similar to that used by the global ABM network.

A copy of the website (long since gone) is maintained at the Internet Archive:

Our business plan and presentation can be downloaded below:

Here is a demo web application / SaaS called SpeedVisit that individuals and companies can use to easily and quickly record visits from people to record basic customer demographic information.

The definition of ‘visit’ is pretty broad. It could be customers, co-workers, classmates, attendees in many situations including:

The demographic information that you can record currently includes:

The site is mobile friendly responsive design so it works on phones, tablets, laptops and desktops.

The data is totally portable with easy export of all visits to csv file. It is setup with SSL so your data will be securely transferred between your browser and the server.

This is a screenshot of the top of the visit capture page which is the central feature of the application and workflow.  Simply use radio buttons and choosers to select categorize the visitor and add record. The page will then be ready for the next visitor. The data is available for anyone else to view it, to view aggregated statistics, etc. This is screenshot of the recorded visit data. Car2Go provides developer access to their real-time vehicle location and parking availability, and service area boundaries for all of their city locations around the world.

I was using the Car2Go API to power a website created for my own use after struggling with the official Car2Go map on their site when using my mobile phone. I wanted a way to find cars by street locations.

I am waiting for ZipCar to get their API up and running which should be available Fall 2015, then I will integrate that into the cardivvy site too so I can see where both cars are available.

This is example of Car2Go service area boundary for Vancouver area. 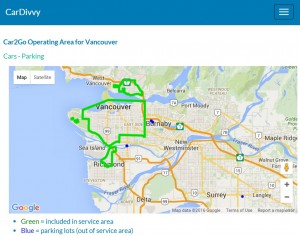